We can consider the types of damage in historical buildings under 9 headings. These damages differ depending on their location and environmental conditions. A traditional building on the roadside, for example, is exposed to pollution from exhaust gases from cars. After natural events such as rain and snow, it reacts with water, causing chemical dissolution on the structure.

It is the type of damage especially done on lands that are not suitable for building. This type of damage is divided into seven groups according to the reasons for its formation. Weathering, bulge, sitting, swelling, rupture of parts, cracks and slips.

Settlements: It occurs when the ground layer is compacted by the effect of different size and force. It is more common in sloping lands. Is it only seen on slopes ? No. It can also be seen on flat terrains. There are certain reasons that affect this situation. Conditions such as ground breaking hazard, increasing ground cutting resistance, decreasing foundation depth and foundation width, decreasing ground volume and increasing groundwater level may cause ground breaking.

The main reasons for its basic sitting:

The most important parts of a building are the places where carrier systems are located. When I say carrier system, I do not mean today’s structures. Why did I use such a sentence? The answer is simple. The carrier system in today’s buildings are columns and beams. In traditional buildings, the carrier system is walls, buttresses and feet. These are the standing systems that sustain the structure. If one or more of these is done irregularly or incompletely, it will cause damage to the structure over time. I will try to explain the situation by giving examples from today’s structures in order to have a better place in your mind. Why are there columns in all corner points of the buildings, have you ever thought about this? We could also build structures as in Figure-1. Nobody does this kind of building, but let’s assume that it is built. 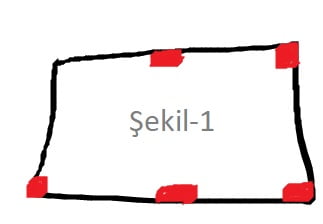 An equal amount of load is placed on the columns on the right hand side, while more weight will be placed on the left hand column. This is just about the vertical load I am talking about. In horizontal load, the left column will be demolished by not being able to withstand the weight. In other words, the main reason for the column scheme to be this way is that it is desired to distribute the load of the building equally in terms of static. I hope I have explained the logic of the carrier system with this sampling. If we return to traditional structures; The best example of this type of damage is the Hagia Sophia Museum. When it was first built, its dome was covered with a lower sailing vault. The fact that not enough struts were used to exceed the width of 31 meters caused cracks in the walls over time.

Many ancient cities, temples, theaters and pyramids in the world are made with carefully selected materials. The limestone, kufeki stone and marbles used were chosen to be large and durable. This is the main reason why these masterpieces made thousands of years ago have survived. The poor quality of the materials used (wood, stone, brick, adobe) causes deterioration in the structures over time. Example; The stone used should be stratified so as to be in nature. During its processing, attention should be paid to the parts coming to the front, in other words, it should be shaped according to the flow of water. The brick to be used should be chosen from the well-cooked one, so that its strength against water and weight is stronger. Surface loss, decomposition and spreading occur in uncooked bricks. The tree to be used must be strong against the load.

The components that make up the structure should be made using suitable binder materials and in a suitable manner. When the appropriate material is not used, the structure deteriorates over time. Measures should be taken to prevent water from reaching binding materials such as iron and shaft, especially in structures where cut stones are used. The fact that water reaches the iron among the stones speeds up the rusting of the iron. Buddha causes rot in iron.

Annual routine maintenance of structures is required. Because the temperature differences that occur during the year cause tension and compression in the structure. In addition, the water on the structure undergoes evaporation over time as a result of rain. It causes physical and chemical deterioration on the walls due to the salt it carries in the rain. With the development of the seeds brought by the wind and placed in the roofs, wall cavities and joints, a tree or moss formation occurs on the facade of many neglected buildings. Animals such as birds, insects, mice also engage in activities that damage monuments. Lichen and microorganisms settle on the stones, causing them to deteriorate.

We can count this title in Natural factors. The main reason I opened it as a different title is for a better understanding of the subject. Traditional structures have a massive shape that does not change. So, the movement in the horizontal direction is the same for the whole structure. They are less resistant to earthquakes because they do not have a stretch. Another effect of the earthquake on traditional structures is liquefaction. Earthquake waves can increase pore water pressure on the ground. In this case, the ground does not bear the structure and collapses. Events such as landslide, flood and volcano eruption also cause historical structures to be damaged or destroyed.

People can also cause historical structures to be damaged or even destroyed by actions such as neglect, abandonment, and deliberate destruction. Unconscious changes, especially on historical buildings, speed up the damage of the building. Each traditional building is built to withstand a certain weight. Excessive load causes the structure to collapse or fall.

Industrial wastes that cause air pollution and gases from cars form a dirty layer on historical buildings. In addition, the carbon dioxide and sulfur dioxide gases in the air descend on the structures together with the rain. These chemical gases react with water to form acids that dissolve stones. Stones, the pores of which are filled with calcium sulfate, are poured in layers depending on the depth of disruption.

While building historical buildings, it was made by calculating human and horse carriages. Today, as a result of passing along these structures, many negative situations have occurred in the works.Especially the vibrations of large vehicles (such as trucks and buses) and the pressure on the ground cause cracks or collapse in historical buildings. To avoid such disadvantages, it should be shaped by considering these issues at the time of city planning.

Thank you for reading the article.

#carrier system #carrier system failures #deterioration in traditional structures #failures #faulty material use #historical places
Onceki Yazı What is Stratocracy? What it means?
Sonraki Yazı Who are the Hyksos? (Shepherd Kings, Princes of the Foreign Land)